Climate change is happening now. Using a human rights approach in climate law and litigation is gaining traction among the international climate law community because of its potential to bring even more urgency — and a moral force — to the climate change problem. 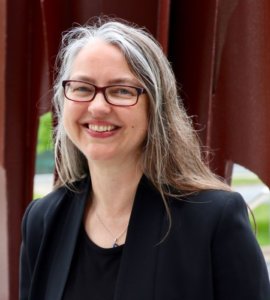 On May 19th from 6:30 to 7:30 ADT, Dalhousie’s Schulich School of Law is hosting Climate Law and Human Rights, an Open Dialogue Live panel discussion that will explore that potential.

Sara Seck (shown left), the associate dean of research at the Schulich School and member of the Marine & Environmental Law Institute, will moderate this session.

Dr. Seck explains that international climate law — a relatively new area of law — is rooted in the 1992 United Nations Framework Convention on Climate change and the 2015 Paris Agreement. She says that conventional approaches to addressing climate problems using these frameworks focus more on the state’s obligations to reduce or offset emissions and adapt to climate change — in other words, mitigation and adaption. There’s only a brief mention of human rights in the preamble to the Paris Agreement.

There are climate impacts, however, that still can’t be avoided through mitigation and adaption strategies. That’s where the concept of climate loss and damage comes in. For example, sea-level rise, ocean acidification, droughts, and extreme weather events have already caused loss and damage to crops, fisheries, and infrastructure world-wide. Human health and cultural heritage have also fallen victim to the effects of climate change, and Dr. Seck points to the National Inuit Climate Change Strategy for an overview of how the warming Arctic region is affecting the Inuit people.

“Loss and damage also relate to the idea of climate justice: that those least responsible for climate harms often suffer the most as a result of climate change and this is an injustice that needs to be remedied,” says Dr. Seck.

Panelist Unwana Udo says that many within the international climate law scene recently recognized the need to establish climate loss and damage as a separate head of climate action alongside mitigation and adaptation. Another recent development, he says, is the link between climate change and human rights.

“The human rights dimension brings a sort of focus to humans as the victims of climate change,” says Udo. “We’re not just talking about the environment as an abstract being anymore. If humans are the victims, we expect that stakeholders would act faster and would take more aggressive steps to address climate change.”

A human rights approach to climate law and litigation can also address the reality that climate change affects different groups of people in different ways. People living on the coast are more vulnerable to sea-level rise than those in the mountains, says Udo. Climate change also has a greater impact on future generations than it does on adults today. Udo takes a special interest in the principle of intergenerational equity, which he’ll discuss on the panel. He says it’s “social equity between generations,” where current generations should be expected to uphold and protect the rights of those who will live in the future.

Panelist Siobhan Quigg, on the other hand, will discuss the rights of today’s children and how those rights should be fought for within the context of climate change.

“Children face disproportionate harm compared to adults,” says Quigg. “Not only are they the most impacted because they’re the next generation and will be around longer to suffer the consequences of climate change, they’re also more vulnerable because of their stage of development and their relative position in society.”

Quigg references UNICEF’s finding that around 3-million children under the age of five die each year from environment-related diseases. Besides the physical toll, climate change also affects children’s mental and economic health. She’ll also discuss what kind of role the corporate world should play in supporting children’s rights.

“In an earlier time, states were dominant in regulating environmental and human rights concerns,” says Quigg. “But businesses are now such a huge part of the environmental regulation governing systems that this time, they can’t be ignored.”

The right to food

Panelist Charlotte Hobson will dive into the use of a specific human rights argument in climate litigation within Canada: the right to food. It’s a topic she focused on when examining what the COVID-19 pandemic has taught us about planning and managing other global crises such as climate change. Food insecurity is on the rise because of climate change leading to losses in crop productivity, fisheries, and biodiversity as a result of deforestation.

“Within Canada, the most obviously impacted are Indigenous populations,” says Hobson. “They’ve contributed very little to the climate crisis but are facing these massive harms that are very visible with their food supply: changing animal populations, fishery declines and things like that.”

Although the right to food holds potential as a tool in climate litigation, it’s use in Canada is currently limited because it’s not protected under the Canadian Charter of Rights and Freedoms.

“There have been lots of really interesting arguments to try to bring [the right to] food within the charter,” says Hobson. “After looking at what judges have done with those, I found they’ve been very skeptical.”

Hobson will discuss the connections between human and environmental rights as well as the potential ways that Canada could ensure the right to food is protected into the future.

Join the conversation and learn more about these topics on May 19. Watch the replay on YouTube or Facebook Live.