Point and counterpoint: Exchanging views on the future of Atlantic Canada

By Warren McDougald for Dal News

Prominent former politicians of different political stripes gathered at Dalhousie on Monday, Sept. 30 to discuss the big policy challenges that lie ahead for Atlantic Canada.

A crowd of nearly 200 gathered to hear the political leaders discuss a wide range of topics including climate change, healthcare, Indigenous-Crown relations, and the Atlantic Canadian economy.

The discussion began with an opportunity for the political leaders to identify the most important issues facing Atlantic Canada today. A consensus quickly emerged among the majority of the panellists that the Atlantic region needs more immigration to sustain and grow the economy.

“I think the most pressing issue right now is people. Atlantic Canada simply doesn’t have enough of them,” said Anne McLellan, a sentiment that both MacKay and Dexter agreed with. McLellan continued, “In this election, people in this region should be talking to their leaders about how we ensure we have sensitive, smart immigration policies.” 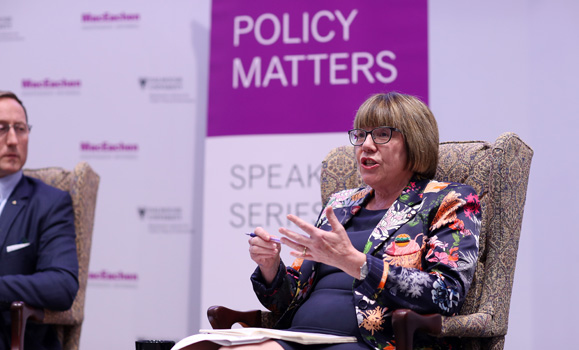 At times, panelists’ differing opinions led to some spirited exchanges, particularly over the topic of environmental protection. Peter MacKay spoke passionately in favour of an energy east pipeline while Janice Harvey disagreed, citing the impact we are having on the natural environment.

“We have three billion fewer birds in North America than we had in the 1970s. Globally, we have lost 60% of our wildlife in the past 40 years. Our trade-offs are not serving wildlife well,” said Harvey, in response to Mr. MacKay’s suggestion that the oil industry is over-regulated.

The group largely agreed on the health care challenges.

“We cannot afford, in a small, poor province, to spend over 20 per cent of our GDP on healthcare” Darrell Dexter noted.

The audience was animated throughout the discussion as cheers and laughter could be heard in response to the speakers’ comments. Megan Macpherson, a student in Dalhousie’s Masters of Public Administration program, was at Monday’s event and commented on the speakers’ performance. 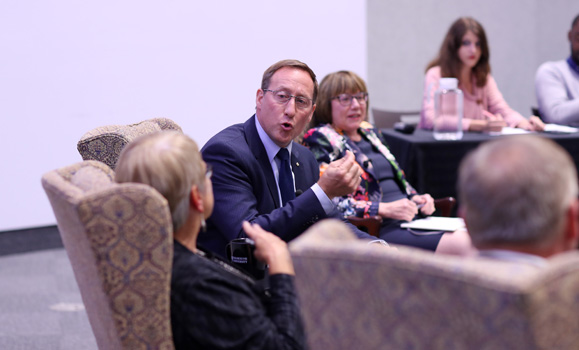 “The panel was an engaging fusion of some of our most well-known political and policy experts. Hearing their opinions and experience applied to the current Canadian political landscape, especially with a momentous election on the horizon, was enlightening for me,” Macpherson noted.

With all eyes focused on the federal election candidates, the organisers at the MacEachen Institute stressed the importance of learning from those who have experience.

“We wanted to have a conversation that involved politicians who have been there and done it – – from working in the political trenches of Atlantic Canada to having some of the top political jobs in the country,” said Kevin Quigley, Scholarly Director of the MacEachen Institute.

The policy challenges addressed by Monday’s speakers are sure to come up again across the Atlantic region as the federal leaders vie for votes in the Oct 21st election.

The full discussion was available to an online audience via Facebook live and a full video is available now on the MacEachen Institute website.